In 2014, Carlube supported Sam West as the main sponsor in his British Superstock 1000 campaign. The highly competitive series attracts well known international riders’ and is a support series of the British Superbikes, highly regarded as one of the best superbike series’ worldwide. The championship races at famous circuits throughout the UK including Silverstone, Oulton Park and Brands Hatch as well as a Dutch round at Assen, home of the Dutch TT – the longest running MotoGP race in the world. 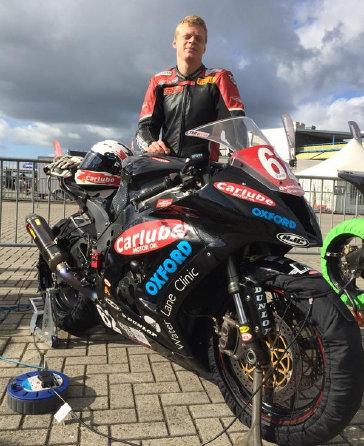 Sam spent 8 grueling days in hospital with a broken pelvis, and after that many months of intensive physiotherapy to get fit again. Everything had to be put on hold so he could focus on getting well enough to compete again. During this time, Sam missed multiple rounds of the British championship and other races which he aimed to compete in, such as the North West 200 road race in Northern Ireland.

Returning to Racing bravely, Sam returned to racing 7 weeks after the accident on his 600cc machine. Though excited to be back on the bike, Sam was racing in his first Manx TT, an annual event which takes place on public roads in the Isle of Man, where riders have to navigate around nearly 250 corners on the 37.73 mile lap, completing up to 6 laps and 2 pit stops for fuel and tyres during the race. The event, which takes place in August, is highly regarded as the most dangerous and difficult racing event of any kind on the planet, where riders go handlebar to handlebar at speeds in excess of 200 mph and an average speed of 130 mph for the top riders. Over the course of the two weeks, Sam was receiving physiotherapy regularly, and by the time his races came around, he was feeling much better.

His first race was in the Newcomers A class, and despite his injury, Sam had been strong in practice, lapping consistently at an average speed of more than 115 mph. In the race, Sam was racing strongly, completing his first lap in fifth position and a standing start lap time of 113 mph. By the end of the second lap, Sam had climbed to second position, recording his quickest lap, but it was all to end in a very sorry state. On the final lap of the race, Sam encounter fuel issues with his bike, which put him out of the race from a podium. A bitter blow for the team and for the Cheshire man.

The Season in Review…A steady start

The opening round of the campaign was at Brands Hatch, and a capacity field of over 40 riders entered, however only 38 riders could qualify for the race. Sam managed to get through his group 11th and after both groups of riders had been combined, Sam was 28th overall, just over a second off the overall fastest. Come race day, Sam made a steady start to his season, not wanting to damage his motorcycle in the first race. As the laps counted up, Sam began picking his way through the field as other riders came into trouble. Resultantly, Sam ended the race 24th, and was happy to have qualified and finished in the opening round.

At the second round at Oulton Park, which was also his home race, Sam started with a strong result in the free practice session and positioned well in the first qualifying session. However, a fault with the bike in the second qualifying session meant that he slipped down the order while others improved. Come race day Sam raced hard right from the off, quickly regaining positions. Unfortunately, the same bike fault came back during the race and Sam struggled to continue, but still managed to bring the ‘Carlube/Water Lane Physio’ Kawasaki home to finish in a very respectable 23rd place.

Round three moved to Snetterton in Norfolk, and Sam struggled on the Saturday, managing a 32nd position in the qualifying sessions. Despite this, Sam was not deterred and worked his way to a fantastic 19th position on race day, an exceptional result considering the race was red flagged after just 6 laps.

The series moved to the Knockhill Circuit in Scotland for round 4, and Sam was hoping for better luck than in 2013, where a mechanical fault dropped him out of a top 20 position with a lap to go. However, in the first Friday practice session, disaster struck as Sam was involved in a large crash which involved 8 riders.

Sam returned to the Season Finale at Brands Hatch, where he was hoping for a good result. He got off to a great start with a solid qualifying position for the race. However, in the opening laps, he was hit by another rider, although managed to stay on the motorcycle. Unfortunately, later on into the race he crashed, although luckily escaping serious injury but missed the position he was so hoping for.

Sam continues to receive Carlube support, still contesting in the British Supersport series as well as road racing on closed public streets, where a recent result of 14th at the Macau GP was an exceptional result for the racer from Cheshire. 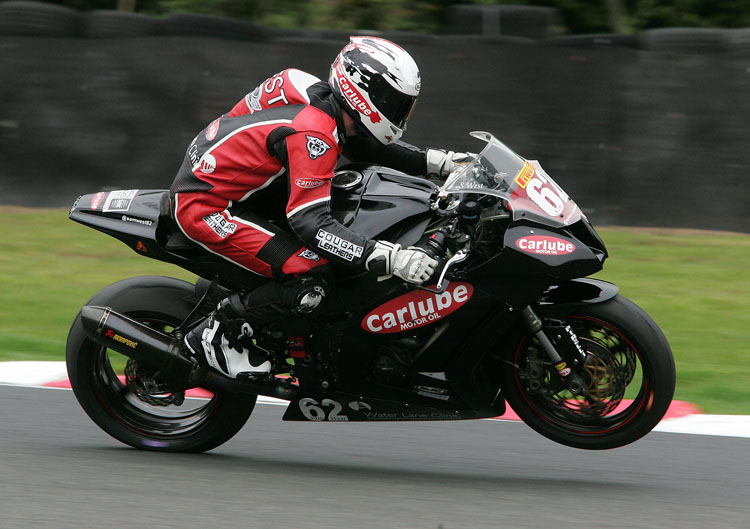