Carlube sponsored Sam West, completed his final event of the 2017 season, a road racing event around the streets of Macau, a territory in southern China located close to Hong Kong. The 6.2km Guia Circuit is highly regarded as the most challenging motorcycle race in the world, even topping the Isle of Man TT due to the crash barrier lined course and the severe lack of runoff. Some riders are known to purposely lean on barriers to find the fastest way around the circuit. 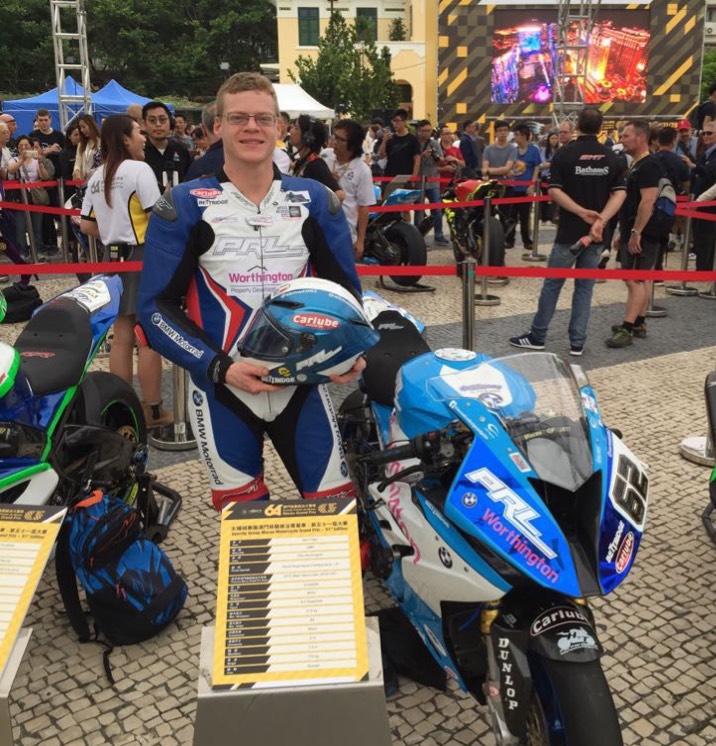 This was Sam’s third visit to the circuit, after finishing 17th in 2015 and 14th in 2016. Sam was hoping to go even better this year, especially after his 2017 results at the Isle of Man TT and Ulster GP, where he is largely considered as one of the rising stars in the road racing scene.

Sam arrived at the circuit mid-week to acclimatise to the humid Macau air and get his BMW S1000RR Superbike sorted after it had been shipped half way around the world. After a top up of Carlube oils, and a few extra decals added to the bike, Sam was ready for the Opening Ceremony, where riders and drivers from all classes participate in a public show, lining up alongside other road racing greats as well as Formula 3, GT and WTCC drivers. 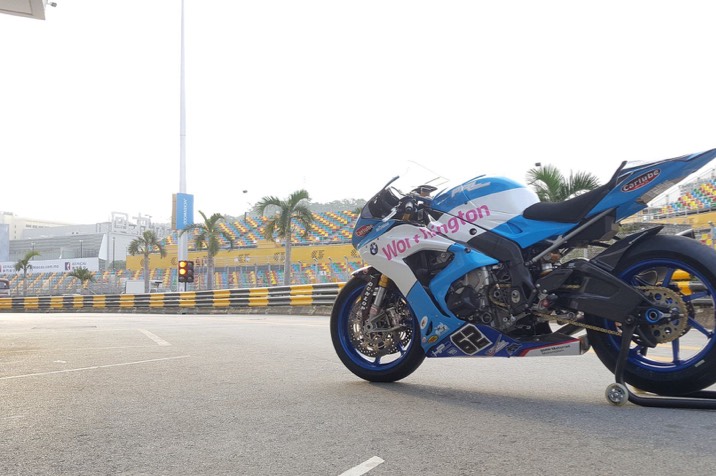 On the Friday morning at 7:30am sharp, Macau was awoken by a cacophony of motorcycles as the first practice session started. This session would be vital in order to remove any ongoing teething problems and for Sam to get used to his BMW, which was now wrapped in a carbon fibre race fairing, which was both lighter and safer. Sam posted 19 lap times in the one hour session, and a best time of 2:32.6 placed him 16th, just thousandths of a second behind the next fastest rider Dan Cooper and 2 tenths ahead of International Road Racing front runner Marek Cerveny. 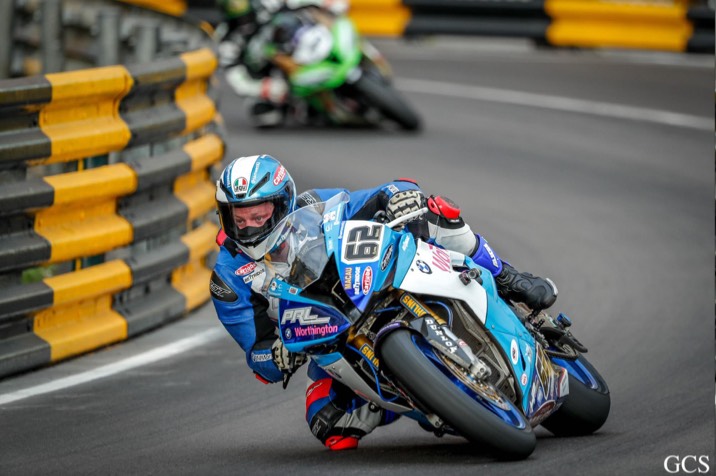 A solid start to the event and a session that would set Sam up nicely for the first qualifying session that afternoon. In qualifying, Sam’s aim was to go safe and steady, as there were two sessions that would count towards his grid position, so Sam would get another chance the next day.

Regardless, Sam finished the session 14th, and clocked a 2:30.9, 6 seconds quicker than his time in the same session last year! An incredible achievement and one that goes to show how far the Wilmslow based rider had come in the last year. 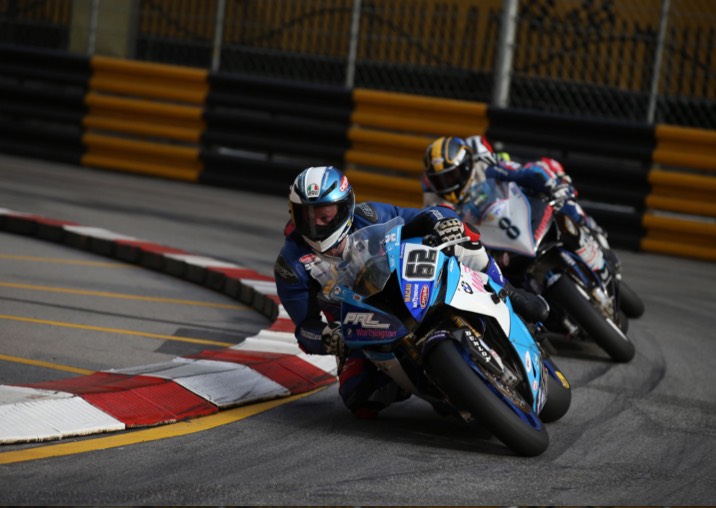 In the second qualifying session, Sam improved further, shaving tenths off his lap times every time he went past the timing line, finishing the session on a 2:29.4, a 1.5 second increase compared to the earlier session. Even so, every other rider around Sam had also gone much quicker, so would line up 17th for the 12 lap race. The same lap time last year would’ve placed Sam in 12th, which shows how much improvement has been throughout the field. 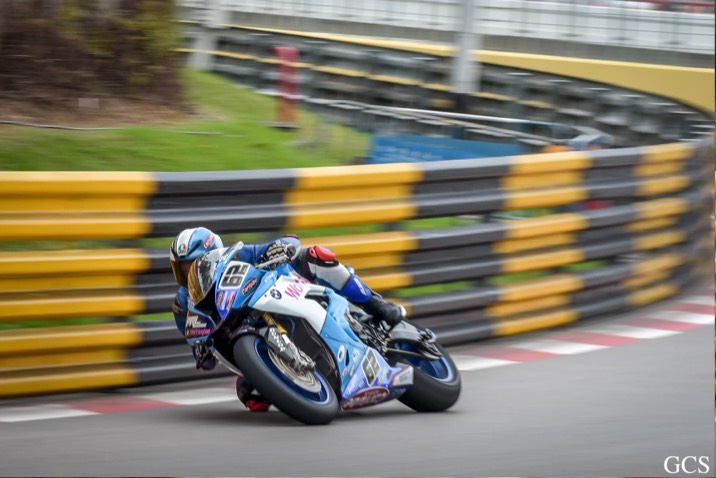 At the start of the race, Sam quickly moved up to 14th, and started battling with other riders in the opening laps. As Sam settled into the rhythm, the red flag was brought out on lap 5 due to a racing incident. Sam toured back to the pit lane unharmed, however all was not well. A rider just behind Sam, and a fellow rising star on the roads, crashed at the penultimate corner, colliding with the outside barrier. Unfortunately, the rider involved, Daniel Hegarty, succumbed to his injuries sustained in the crash and lost his life on the way to hospital. The race was not restarted and therefore Sam finished in 14th place, a bitter end to what had been a very successful week.

Despite the shortened race and death of a fellow rider, shockwaves of which are felt all through the paddock, Sam equalled his best result at Macau, and went a couple of seconds faster per lap in the race than he has done previously, something that is no mean feat. 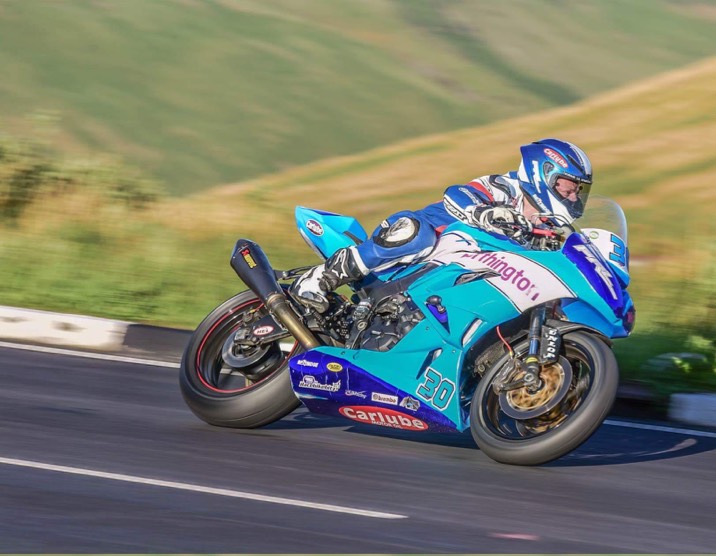 So, this event marks another year of racing complete for Sam, and another year of vast improvements. Points in British Superstock 1000, top 10 finishes at the North West 200, a 126 mph lap at the Isle of Man TT as well as third in the Privateers, 130 mph at the Ulster GP and finally to finish the year a bunch of personal best at Macau. A solid year for an ever-improving rider.