T-Cut was invented by Tetrosyl’s founder Clifford Schofield in 1954 and is an abbreviation of ‘Tetrosyl Cutting Oil’. Before T-Cut was created there were no other cutting compounds on the market that could offer the restoration properties of T-Cut. Due to the demand and position of Tetrosyl within the market, T-Cut was swiftly adopted by the car garage trade where the term “T-Cutting” was the habitual response when talking to professionals and hobbyists. The precisely balanced formula removes a fine microscopic layer of paint; therefore restoring the colour and removing scratches, blemishes and swirl marks. Original T-Cut has a very distinctive smell which is unique to this product.

The magic of T-Cut has been passed on through the generations and is a by-word for the action of restoration and scratch removal. Originally it was on the retail shelf in a glass bottle but was soon to be replaced by our iconic tin. Once in a tin, T-Cut was only available for purchase in 5 litre units but an increase in demand for the product soon saw it develop into the retail environment in more user friendly 300ml and 500ml tins. Towards the end of the 20th Century, T-Cut was transferred into the more user friendly plastic bottles, in which they have stayed up until early 2017. However, we will see T-Cut The Original Restorer return back to its roots and into a tin once more (see The Future of T-Cut).

T-Cut Original was initially a factual title that is often confused. When first coined; ‘Original’ meant the colour of the product, not an original or unique product. Today we use ’The Original Restorer’ to signify the original product, the first and the best; but also to differentiate between the original product and the new Rapid Scratch Remover. 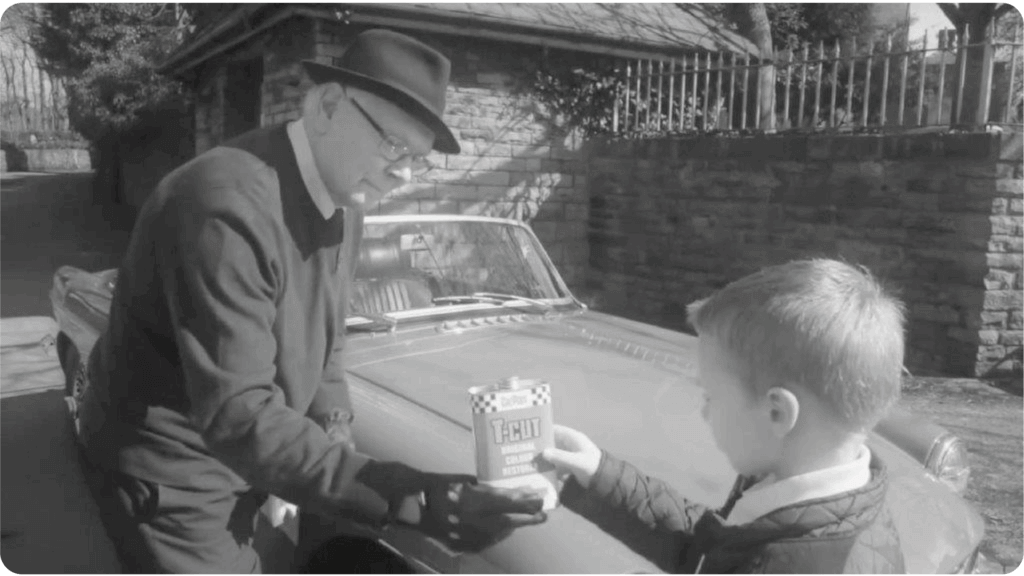 T-Cut is passed on through the generations

The Evolution of the T-Cut packaging